The Number One Rule of Performance 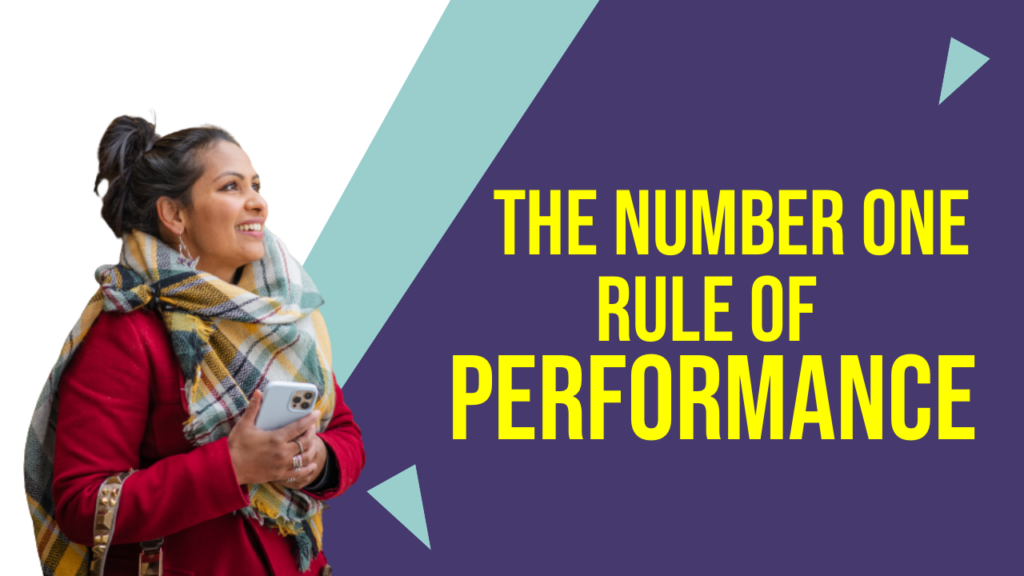 I love being in front of the camera, but I do use the Number One Rule of Performance.

If that makes you want to barf in my hair, bear with me – I have a gift for you. And let me assure you, it wasn’t always this way… When I first started working in television, I had to stare into the black hole of those giant broadcast cameras. I had been comfortable being on stage, but now speaking to a camera, into a void, I was frozen.

Without the instant feedback of human interaction, I found myself getting exhausted. It would quite literally suck the energy out of me. Until I learned to bounce my energy off the camera. Which is what I want to teach you to do today.

Now, being in front of an audience has become such a part of my life, that I constantly have people telling me, “Wow, I can’t imagine being on camera all the time. How do you always know the right thing to say?”

In fact, just the other day I screwed up on a group coaching call and a metaphor I was piecing together fell apart. Instead of letting it derail me, I admitted to it, and we all had a good laugh together before moving on.

I release the need to be perfect while maintaining effortless authority by deploying the number one rule of performance:

If you screw everything else up, and get this one thing right, it’ll probably still work. But if you do everything right, and screw this up, it won’t work. If you’re not having fun, your audience will be wildly uncomfortable. You’re their emotional portal. If you’re enjoying it, even if you bungle it, the audience will go with you and experience your mess up as you being authentic and intimate.

If you’re being vulnerable, even if you’re crying, but you’re comfortable being witnessed in that space, then your audience can feel comfortable too. But if you act like you’re embarrassed or want to hide, your audience will feel very strange watching you.

Part of being a coach is performing, and that can often be the trickiest part for people. They’re brilliant and empathetic, offer great advice, and want to share their experiences with a wider audience. But for many, the idea of a wider audience is terrifying. This is particularly apparent in the days of Zoom presentations, when you’re speaking to a laptop camera instead of to a real audience.

A lot of coaches prefer one-on-one, and in many ways, I do too. But I also cherish the opportunity to share my message with a large group on my Facebook Lives or group coaching calls. So today, I’m going to share with you the exercise I adopted when I first started working in television that helped me overcome my fear of performance.

The “Audience of Spirit”

So how did I get over my “freeze” in front of those huge broadcast cameras? Instead of imagining people on the other end of the camera, which can sometimes be distracting, I imagined I was talking directly to God, or the Universe, or my own higher Spirit.

Speaking to an audience of a higher power takes away the pressure or judgement that you might screw up. Even if I rambled, or messed up my words, or forgot my lines, I’d be forgiven. There’s something about that relationship that makes me want to lean forward and give more.

It helped me conquer my fear of the camera.

Everyone has spoken into a void before. And I’m not about a “cold” void. I’m talking about a void free of judgement, the warm receiving space where you talk to a higher power, the universe, even your higher self. This is where I go to experiment, to feel myself, to play out my stories, and re-experience them objectively.

I have cues that keep me on track (which I’ve written about in a different post), but I don’t sweat the details because the universe or spirit doesn’t mind. It’s a loving audience. Practice telling your stories to this higher concept. Find that warm, embracing place where you can build your confidence before sharing your stories with the world.